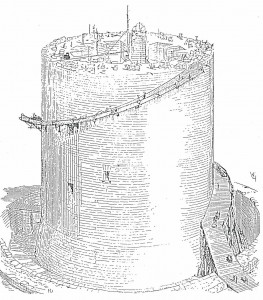 1419 – The construction of the Tower.
Torre del Parco (Turris Prati Magni) is a late Medieval and Renaissance symbol of Lecce.
The Monumental Complex was built in 1419 by the 18-year-old Giovanni Antonio Orsini del Balzo, Prince of Taranto, son of Raimondello and Maria d’Enghien who, at that time, was Countess of Lecce and later Queen of the Kingdom of Naples after her second marriage with the King Ladislao of Durazzo.

In 1434 part of the building became the centre of Concistorium Principis, a Medieval Court presided by the Prince Giovanni Antonio.
It was also the base of the State Mint, where the gold and silver coins “Mali Carlini”, were created.

From 1458 to 1461 the Tower became a Prison where, until today, our guests can admire the prisoner’s engravings on the walls of the fortress.
After the death of Giovanni Antonio, the building became the residence of the Spanish Viceroi that dominated the city, starting from Ferrante Loffredo and finishing with Ferrante Caracciolo.

The Tower today represents the heart of the Torre del Parco venue.

The tower is more than 30 meters high, built on three levels and surrounded by a moat, which in the 1940s was used to host a family of bears, heraldic symbol of the Orsini del Balzo family. (Today there are no bears…)

The park around the Tower was occupying more than 40 hectares, and it had a public and private area: the “Parco di dentro” (inside park), a fenced area that included the Tower and the Prince’s Palace, and the “Parco di fuori” (outside park), public area for exhibitions and markets, that was extended till the urban boundaries.

A special thanks to:
Prof. Gianni Carluccio  – Coordinator of Historical research

For any information or request, do not hesitate to contact us.